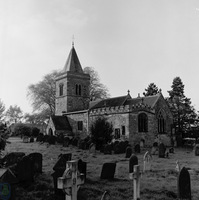 All Saints Church, Pickhill with Roxby

Francis Earle and Anne Duning both of Roxby

Debts
to be paid by the executor of the said Francis Earle for funerall expenses,
legacies and other debts for funeral expenses and legacies £4

The condition of this obligation is such that if the above bonden Ann Earle do well and truly execute, enforce, fulfil and keepeth and testament of Francis Earle late of Kirby Hill in the deaconry of Richmond deceased in paying all his debts so far as his goods shall extend. And law shall bind her to exhibit unto the registry of the said archdeaconry a true and perfect inventory of all and singular the goods chattels and credits which were and did belong unto the said deceased and just amounts of the same when alive shall be lawfully labelled theseunto and (if need required) [enter] into such further bond with more sufficient sureties for performance of the premises as the commissary of the said court for the time being shall think requisite and needful and lawful save, defend and harmless keep the above named judge, the law being of Chester and commissary aforesaid and all his officers and ministers against all persons by reason of the premises then this obligation to be void or else remain in full force and virtue﻿