Apart from his name appearing in the list of Recusants for Brotton in 1780 there are no further records for this first-born son of Ralph & Hannah Welford in the Brotton Parish suggesting he had perhaps moved away from the area in his early twenties. Four years later in 1784, a Ralph Welford, sailor is recorded as marrying in Whitby. This could well be the same Ralph Welford born at Brotton in 1758

A more conclusive clue to the whereabouts of this Ralph Welford is a badly weathered gravestone standing in the churchyard at Christ Church, Ugthorpe which records the death of 'Ralph Welford late of Rock Head Farm in 1832 aged 73' where he is described as the 'dearly loved husband of Ann Duell'. This is not to be confused with a later Ralph Welford who married an Ann Duell in 1878. Rock Head farm, Hutton Mulgrave, was also in the occupancy of William Duell according to Bulmer's trade directory for the Lythe township dated 1890

The records for Ralph Welford now follow and whilst those for Whitby are thought likely to be for the Ralph, son of Ralph and Hannah Welford of Brotton, the gravestone at Ugthorpe is conclusive evidence that this is the same person: -

John, infant son of Ralph Welford, a butcher from Whitby 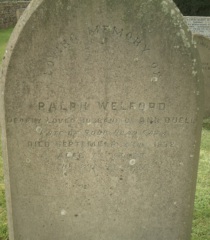