Kelley's Directory of the North & East Ridings of Yorkshire 1893

In one of several violent thunderstorms which passed over Whitby district from mid-afternoon on Tuesday until late evening, the farmhouse at Newton Brow Farm, Ellerby was struck by lightning. Inside the back kitchen at about three o'clock were 70 years old Mrs. Eliza Welford and her two-year old grandson, Alan, son of Mr and Mrs Fred Welford of 3 Council Houses, Mickleby. Mrs Welford was found by her sons in a dazed and shocked condition after the lightning struck. A doctor was called, and despite being given artificial respiration, she died shortly afterwards. Her grandson, Alan was found injured and crying. He had a small head wound and was obviously in great pain. Dr.J.C.Brash, Hinderwell, arranged his removal to Middlesbrough General Hospital, where it was found he had a broken pelvis.

The lightning left the farm house in a state of utter devastation. The whole of the roof tiles were stripped off, and scattered far and wide round the front of the building and the adjoining farmyard. Ceilings from the attics to kitchen collapsed and the glass blown out of every window. Virtually only the shell of the building remained intact, for nearly all the family furniture and other possessions were smashed beyond any hope of salvage or repair. Had the farmhouse stood in the centre of a battlefield and received a direct hit from shells or bombs, it could not have been in a more pitiable state. From one or two scars left on external stonework it seemed that the lightning had struck the apex of the roof at the front of the house. Amazingly enough, despite such carnage, Mrs Welford's budgerigar, "Peter," was still alive in his cage in the wrecked front room which, like every other room in the fairly large house, had not a fragment of glass remaining in the window panes.

Since the death of their father, Mr. Joseph Welford (a former licensee of the Tiger Inn, Easington), about three years ago aged 73, Mrs Welford's three sons have carried on the farm - Mr Frank Welford, 39 Dundas Street, Loftus, the oldest brother and farm manager, Mr Fred Welford, who lives with his wife Mrs. Constance Jane Welford, and son Alan, at Mickleby and Mr Roland Welford, who is single and has lived with his mother at the farm. On Monday, only the day before the disaster in which her young son was injured, Mrs Constance Welford had given birth to a baby daughter in Eskdale Hospital, Whitby.

Mr Fred Welford was in the grassy paddock opposite the front of the house in the few minutes before the storm passed directly over. "I had Alan with me, and we were feeding the hens," Mr Welford told a Whitby Gazette reporter. "As the storm came nearer and I heard the thunder getting louder, I took Alan back into the house to his Granny, who had been looking after him while his mother was in hospital. At the time we had some young calves turned out for the first time, and my brother in law, Mr Robert Featherstone, of Loftus, and I were near them in front of the house. We were driving them into the farmyard, and were near the baler opposite the house when the lightning struck.

There was a terrific flash and rush of heat over our heads. When the lightning struck, rubble and tiles flew into the air and there was a loud explosion. Mr Welford said when he got into the house he found his mother, and son in the back kitchen. "The little boy had a graze on his head, and was crying" said Mr Welford, who went on to say that his mother was very upset. "She was still on her feet and came out of the house, but was much shaken" said Mr. Welford. "We got her a drink and sent for the doctor, but she collapsed and died shortly afterwards”. He added that artificial respiration was begun on Mrs. Welford but was not successful.

The following morning, when a Whitby Gazette reporter visited the farm, the owner, Mr.R.M. Turton of Kildale was looking round the ruined farmhouse with Borrowby builder, Mr L. H. P. Rance. The three brothers with relatives and other helpers were trying to salvage what they could and tidy up as far as possible. Plans were being made to board over the shattered roof as a temporary measure, and Mr Ron Welford was preparing to go and live for the time being with Mr Fred Welford and Mickleby.

The only damage to the adjoining farm buildings was to electric wiring and switches. All the farm stock, even the sheepdog, "Nell" and cats in the nearby barns, escaped unscathed. In the house itself a number of the rooms were too dangerous to enter, for ceilings were hanging and swaying drunkenly, and threatening to collapse in heaps of rubble at any moment. Made up beds were covered with plaster and other debris, electric fittings were scorched and blackened and wiring was ripped from roofs and walls. Even the bath was filled with fragments of laths and plaster from the roof above. Two staircases collapsed and outside nothing was left of the chimney stack.

When the lightning struck, Mr F. G. Bonas, Pond Farm, Mickleby and his son were ploughing in a field about a mile away. "The storm seemed to come up on the high side of Mickleby" said Mr Bonas "and then turn and slant immediately over Newton Brow Farm" Mr Bonas was working over the brow of the hill at the time, and did not see the lightning strike.

An eye witness motoring between Staithes and Hinderwell at the time said she saw what seemed to be a large orange ball of fire hurtle down over the hillside, along a hedgerow and hit the farm.

Hawthorn Farm, the nearest farm to Newton Brow, and lying only two or three fields away, was not affected during the storm, for it had no electricity supply, but Ellerby Bank Top Farm, where Mrs M Summerson lives suffered to a small extent. All the lights fused and a few light bulbs burst, two of them falling out of their sockets and smashing on the floor. A switch in the cow house was blown out. The storm cut supplies to several villages and farms in the Whitby district and for a time, the Royal Air Force Station at Goldsborough was without Electricity.

An inquest on Mrs. Eliza Welford, Newton Brow Farm, Ellerby, who died soon after her farmhouse had been struck by lightning on Tuesday, was held at Brotton Cottage Hospital yesterday (Thursday) afternoon. The Coroner (Mr. Bernard Wilkinson) recorded a verdict of death by misadventure, and expressed sympathy with Mrs. Welford's relatives.

Evidence of identification was given by Ronald Welford, Newton Brow Farm, Ellerby, who said that at about 3pm on Tuesday he was returning to the farm house after working in the fields. As he was nearing the house there was a thunderstorm and he saw a flash of lightning immediately followed by a crack of thunder. Smoke and dust went up from the house. He was about 300 to 400 yards away at the time, and when he got to the house he saw his brother-in-law and his brother Fred, helping his mother and child Alan, to the cow byre. His mother was rather shaken and they got a chair and sat her down in the cow byre. She asked him to get her one of her heart pills. She had been taking them fairly regularly as a stimulant for her heart. He got her one and some water, and she seemed short of breath, and undoing her clothing, he massaged her heart but she seemed to be passing away. His mother died about twenty-five minutes after he had returned to the farm. On the doctor's orders they laid her on some straw and he and his brother gave artificial respiration while the doctor went for an ambulance.

Went up in Smoke

Joseph Robert Featherstone, steel worker, said he was a son in law of Mrs Welford, and was staying at the farm at the time it was struck by lightning. He was in front of the house and half an hour before the lightning struck he heard thunder in distance. Mrs Welford was standing just inside the farmhouse doorway while they were bringing calves in. He saw no flash but he felt the earth tremble and there was a fierce heat as if something was passing over the farm. He heard a sharp crack and the house simply went up in smoke.
Realising what had happened he ran into the house and found Mrs Welford had picked the child up and was trying to get out of the door. He helped her to the cow byre. She seemed to have all her faculties and did not seem too bad. The house was a complete shambles inside, everything had gone.

Dr. Thomas Skeoch, a Middlesbrough pathologist, said death was due to acute heart failure, accentuated by shock. Replying to the Coroner, the Doctor said there was no question of Mrs Welford being struck by lightning. There was no evidence of that at all. She had a heart condition but for her age her heart was remarkably good. He agreed with the Coroner that it was nearer the truth to say she actually died of fright, having a house demolished over her head must have been a tremendous shock. The Coroner said he was certain death was caused by the storm, and the collapse of the house. 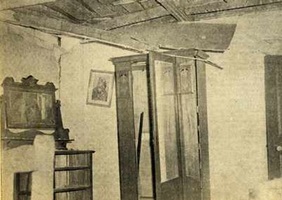 How the ceiling of one of the bedrooms of the farm looked after the lightning. It will be noticed that the beam dislodged by the lightning fell on top of the wardrobe, which helped to shore up the other roof timbers. Wallpaper was torn and cracks appeared