William Erle - Archer having no harness

Margaret and Thomas Erle, the relict and son of William Erle are admitted as executors of his will. 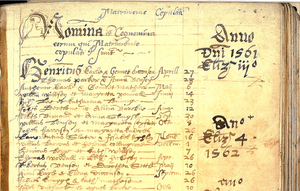 This beautifully written image shows the very first page of the marriage register for St John the Baptist Church in the parish of Knaresborough (then known as St Mary's). The marriages of Henry, Anthony and Francis Earle are shown in close proximity to each other with Henry's marriage to Jennet Dicconson on 27th April 1561 being the very first entry made

I, John Mathew of Bilton, &c., to be buried in Knaresburght Churche yeard, &c. I give to my soone Robert Mathewe of Kirkehammerton 20s., in full contentacion of his childes porcion; to the children of William Mathew, lait of Tentergait, one whie, which whie I will shalbe letten furth and all the profitts which shall come of hir shalbe bestowed upon the said children, att the discretion of my executors; to Anth. Earle of Knaresburgh, of suche porcion as doith belong to him bie the right of my doughter, his wief, 20s.; to John Williamson of Rowcliff, in full contentacion of all suche porcion as doith belong to him bie the right of my doughter, hys wief, 20s.; to all my childrens childer, quallie to be devided amongst them, all my shepe which shalbe living att the daie of my deathe; to my two daughters Jennett and Issabell and to Rob. my sonne, to be equallie devided emongst them, thirtene pece of pewther and everie of them a silver spone; to Tho. the sonne of Will. Mathew, deceased, one silver spone. The rest of my gooddes &c. I give to Thomas my soone, whom I make full executor &c. I will that John Cawdewell and Anth. Waid of Harlogait be supervisors, &c. Witnesses, Parcivall Brodebent, clerk, John Cawdewell, Anth. Waid, Tho. Brodebent."

Membrane 11. May 17, xxiij Elizabeth —Thomas Mathewe is admitted as executor of the will of John Mathewe.

Johanna Erle benefactor xijd. in the Will of her brother, John Dearlove of Tentergaitt

Johanna Erle, widow, is admitted as administratix of the effects of Richard Dearlove

Peacocks List of Papists in the County of York - 1604

Elizabeth Earle, widow of Kirkby Overblows petitioned against Ann Poole that the 'outrageous violence' carried out against her be stopped

The parish registers show that Elizabeth Earle, nee Poole was born in 1637 to parents William and Ann Poole. This would appear to be a mother / daughter argument brought before the Wetherby authorities

Extract from the Knaresborough Baptism Register